Here are three more illustrated book covers from my 2017 reading list. Stieg Larsson’s The Girl with the Dragon Tattoo (this was a reread, duh), Juliet Jacques’ Trans: A Memoir, and Tereska Torrès’ Women’s Barracks. 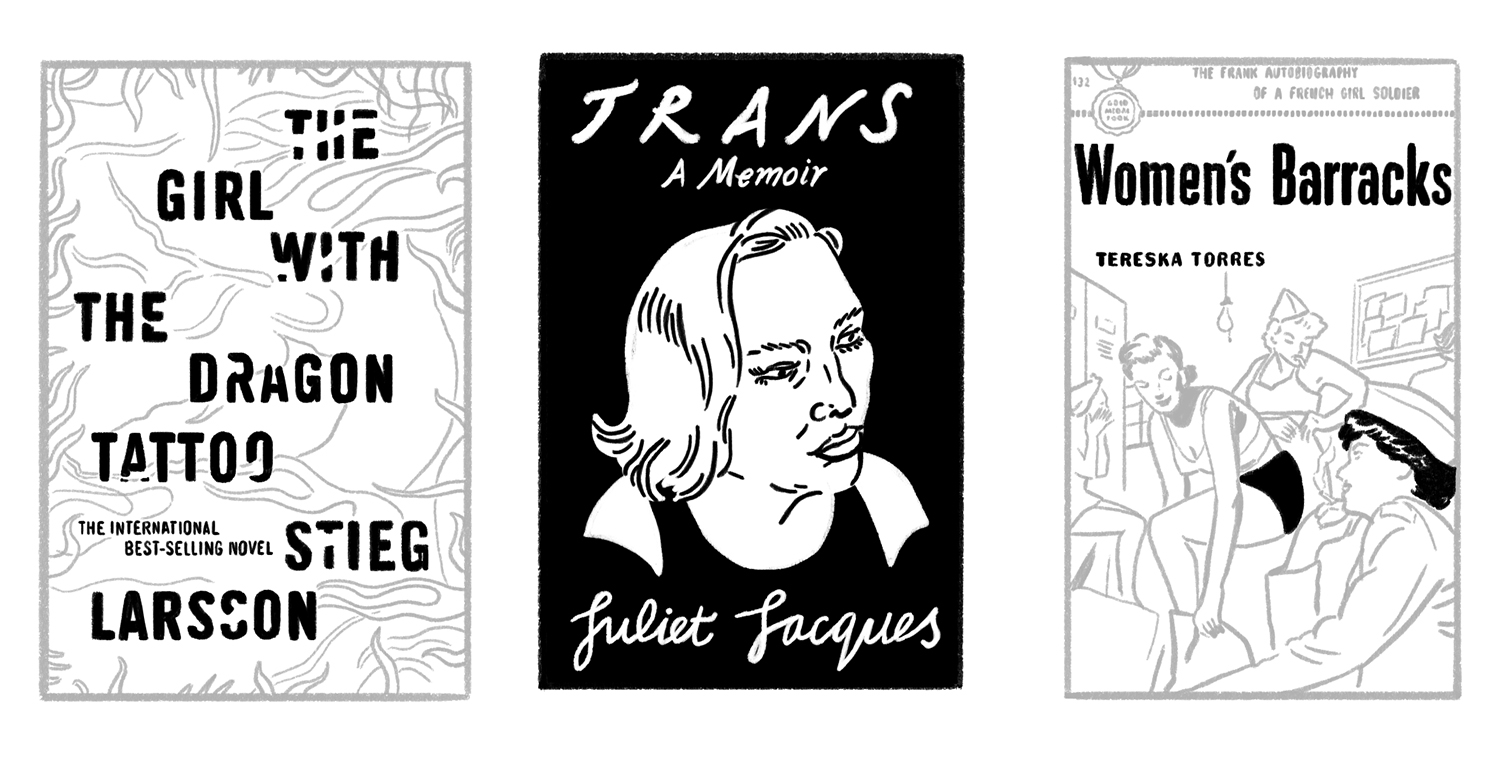 I still love Dragon Tattoo a lot, despite its having an absolutely horrible scene that I have to skip past. I love Salander so much. I love her for having no qualms about breaking laws, or resorting to violence, in order to take down evil, sadistic people. (Related: all the Neo-Nazi stuff seemed, depressingly, far more topical now than it did when I first read the series in 2011.) I love Salander for the clear, firm distinction she has between good and evil. I thought of her when reading Professor Angus Johnston’s words on the ethics of punching Nazis. I mean, you guys know me: more than just about anything else, I’m a sucker for stories of female revenge.

Trans: A Memoir was an excellent read, which enlightened me to some of the intricacies and complications of transitioning medically and legally in the UK. Jacques writes of her experience growing up in rural England, moving to Manchester for college, and, eventually, coming out as a trans woman. Prior to this book, she also wrote a series for The Guardian called A Transgender Journey.

As for Women’s Barracks, I must tell you that 1) I really enjoyed it, and 2) it is far sweeter, and far less salacious, than the cover suggests. The publishing history of the book is also fascinating:

In 1950 Torrès published in the United States a fictional account of her wartime experiences under the title Women’s Barracks, which “quickly became the first paperback original bestseller” selling over 2 million copies in its first five years, as it was the first pulp to candidly address lesbian relationships. In total 4 million copies of the book were sold in the United States and it was translated into 13 different languages. In 1952 Women’s Barracks was selected as an example of how paperback books were promoting moral degeneracy, by the House Select Committee on Current Pornographic Materials. When the book was republished by The Feminist Press in New York in 2003, it was acclaimed as having inspired a whole new genre of lesbian and feminist writing in the US.

There’s more interesting information about Torrès and the book in this New York Times article, published at the time of Torrès’ death in 2012.