Last week, I flew to Massachusetts to speak about comics at my alma mater, Hampshire College. Also speaking was fellow cartoonist and Hampshire alum Melissa Mendes. Here is the poster that Hampshire student Emily Carter created for the event: 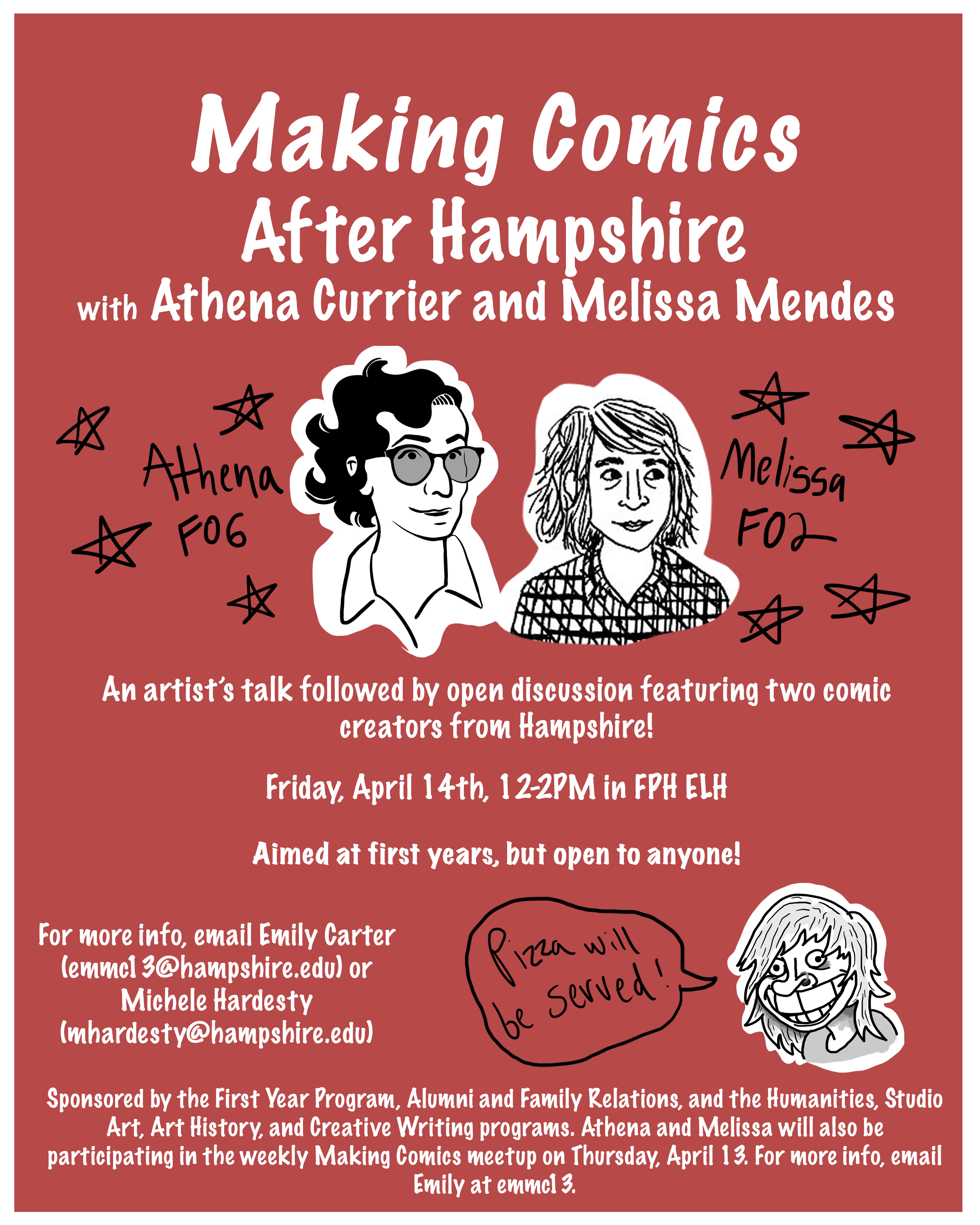 On Thursday, Melissa and I popped into Professor Thom Haxo’s In Search of Character class, and had an informal discussion about our creative projects, during and post-Hampshire. Thom was one of my favorite professors, and is in many ways the reason I first got serious about comics. It was during his Sequential Imagery II class that I first explored my interest in autobio comics, and developed a comic series. That series was called Mod 71. (Hampshire houses for older students are referred to as “mods” and the one I lived in was Mod 71.) For Mod 71, I would sit in my living room and record conversations between me and my roommates on my laptop, and then pull my favorite parts to use in comics. At first, I was very rigid about using the dialogue exactly as it was recorded, leaving in “ums” and “ahs” and so forth. But by the end of Thom’s class, I had let go a bit, and was making comics that were more about my own thoughts and feelings. Here I am standing in front of a Mod 71 comic during my Hampshire presentation on Friday: 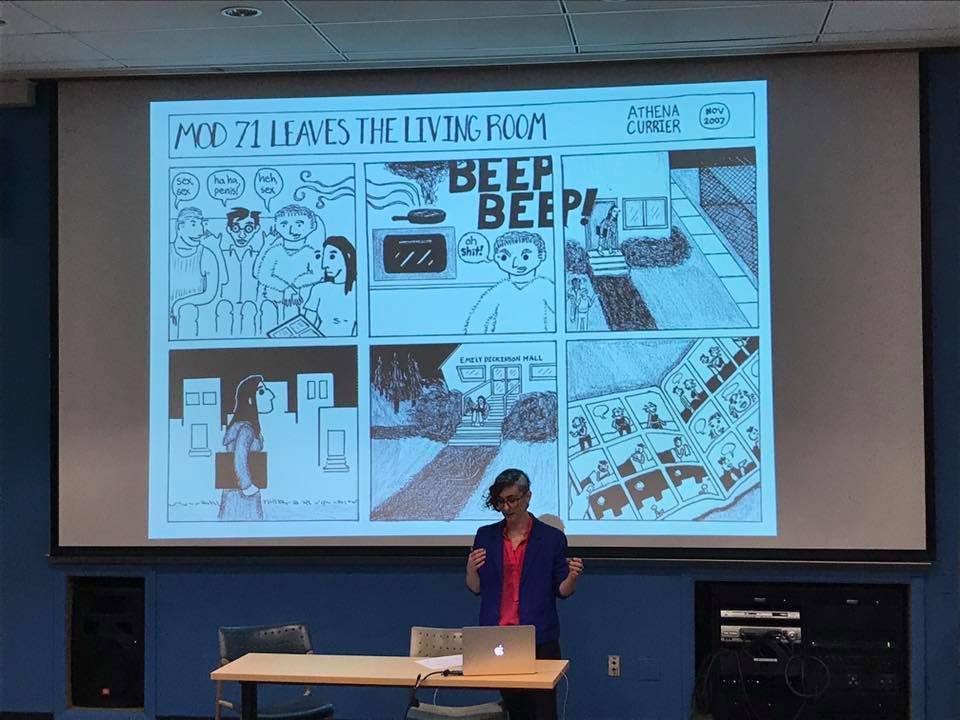 But back to Thursday: after Thom’s class, Melissa, Thom, and I met up with Hampshire Professor Michele Hardesty and some of her students in Hampshire College’s new Kern Center. The Kern Center is a student center but also a “living building,” and was built “with the goal of certification under the world’s most advanced green building standard.” In addition to being eco-friendly, it’s also just a really beautiful space. I was excited to get to see it.

On Thursday evening, Melissa and I joined students Emily Carter and Grace Desmarais for their Hampshire Comics Collective meet-up. I was involved with the Comics Collective when I was a student. We used our funding primarily to buy books for the college library, and added a book plate to each one. I found lots of them while browsing the PN 6700s during this trip: 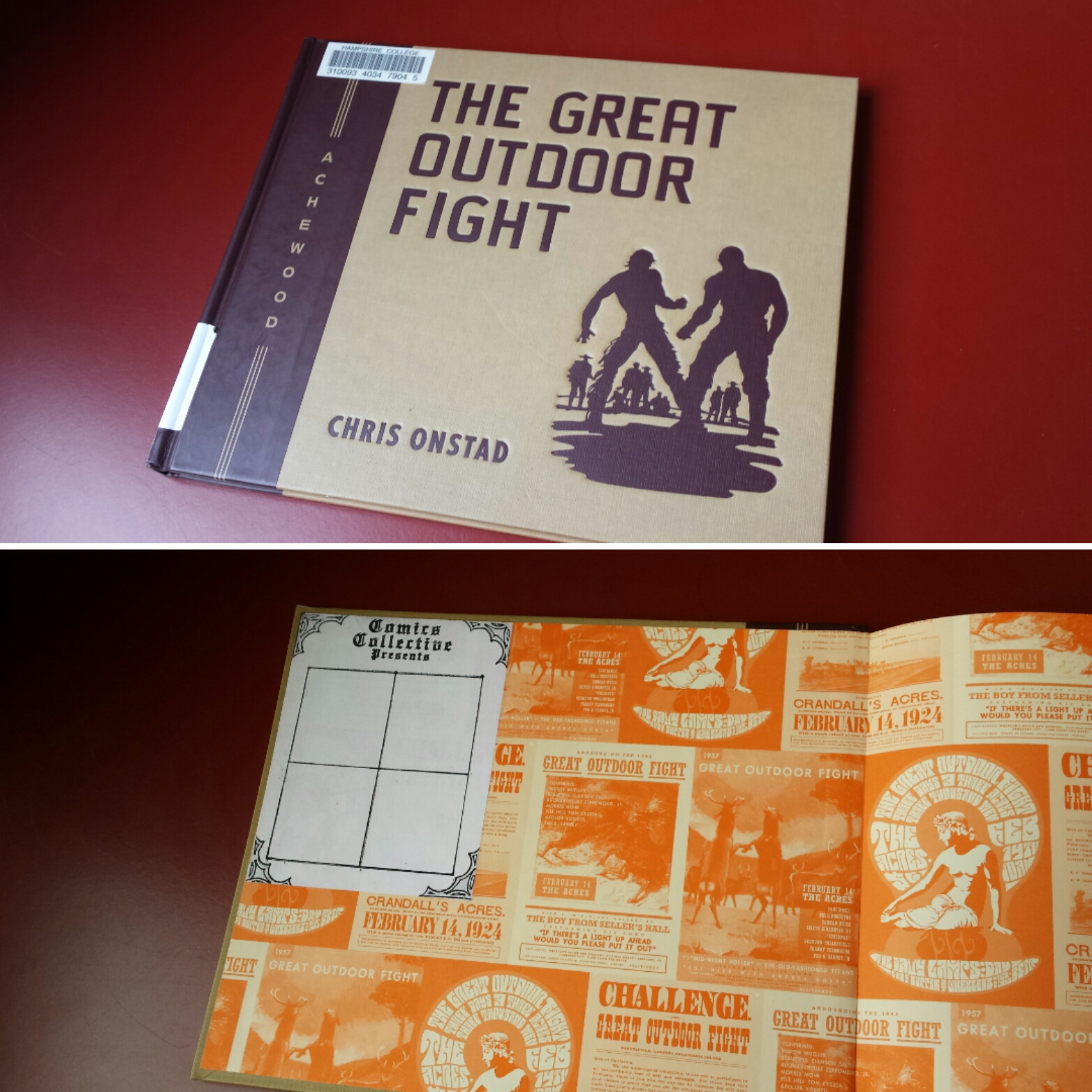 These days, Emily and Grace use the Comics Collective as a place to meet and sketch and talk comics. During our evening with the group, Melissa and I led the students through some drawing exercises. For mine, I brought along blue-line printouts of the traditional 8-page quarter-size mini (still one of my favorite formats). I talked about blue pencils, and signatures, and other nuts and bolts of putting together a mini-comic or book.

The next day, I woke up early for a breakfast with another of my favorite former professors, Ellie Siegel. Ellie served on my Div II committee, and asked all sorts of insightful, probing questions about my work. She was also a fan of my webcomic, Action Athena, and continued reading it after I left Hampshire, which is about the most flattering thing that’s ever happened to me.

On Friday afternoon Melissa and I had our presentation in Franklin Patterson Hall. The theme of the talk was “Making Comics After Hampshire.” Since I (big secret!) don’t actually make my living drawing comics, I began my talk with this uplifting slide: 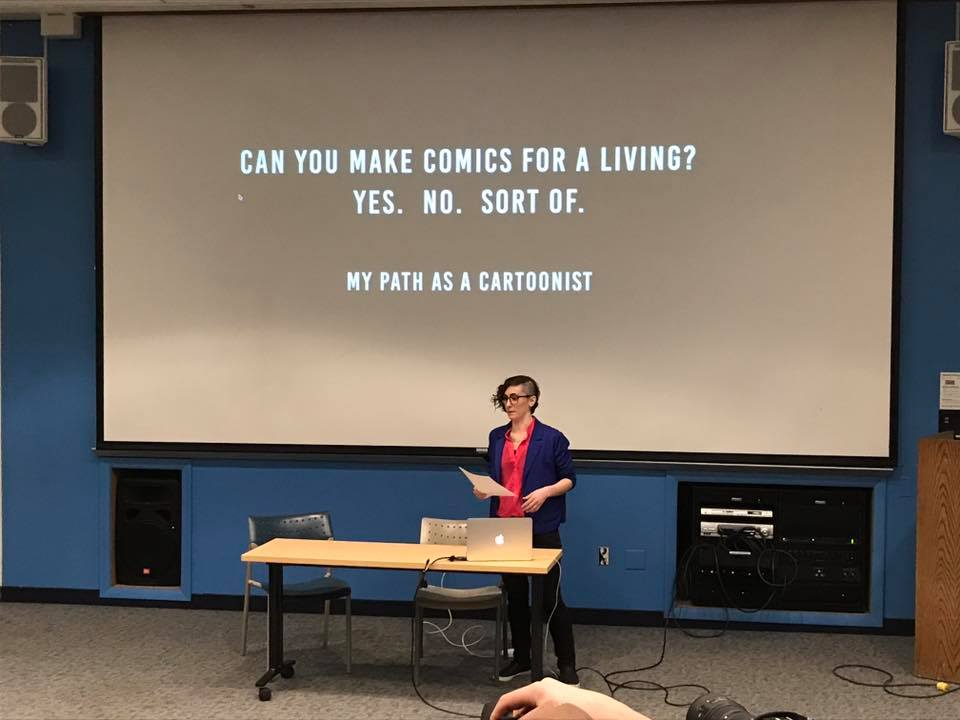 From there, I walked the students through the rather wandering, “Hampshire-y” path that has gotten me to where I am today. From Hampshire College, to a series of post-college jobs (several of them book-related), to comics grad school at the Savannah College of Art and Design, to to my current field, book design. Here I am in front of a photo of my work: 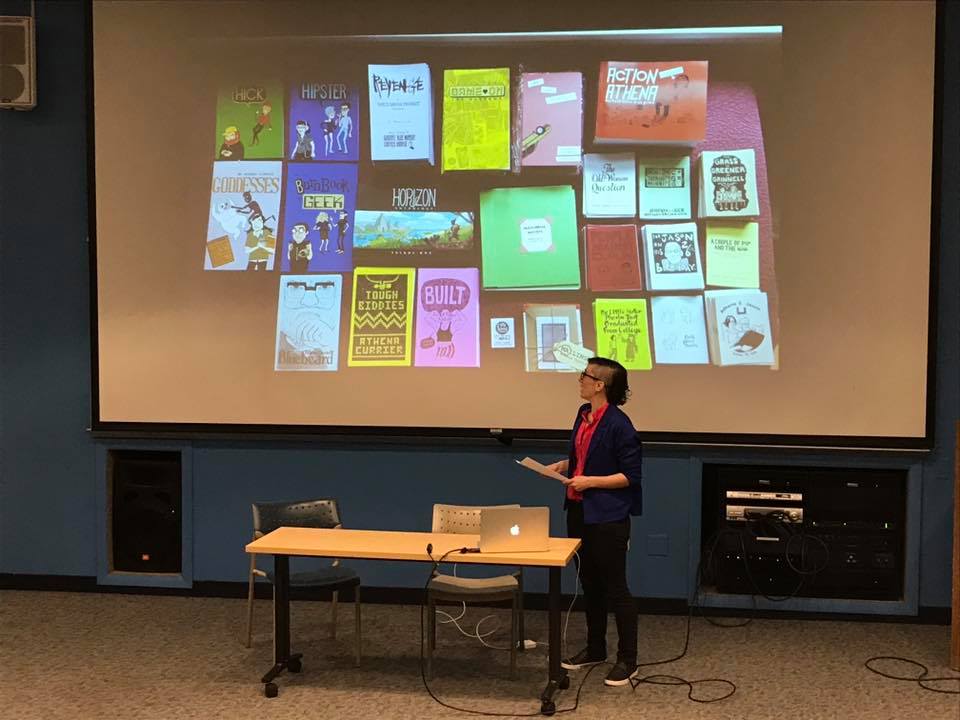 After my presentation, Melissa gave hers, and it was excellent. I love Melissa’s illustration style, and the kinds of stories she focuses on, so it was great to get a behind-the-scenes look at her process. She is currently serializing her latest graphic novel, The Weight, online. You should go check it out.

Once Melissa and I were done with the presentations, there was some time for questions with the audience. The students in attendance were clearly major comic fans, with a heavy skew towards indie comics. It was a pleasure to talk shop with them. Below, on the left, is Melissa and I answering audience questions. On the right is the team that put this whole event together. From left to right: me, Emily Carter, Melissa Mendes, Grace Desmarais, and Professor Michele Hardesty.

Michele Hardesty began teaching at Hampshire during the time I was there, and I took a literature class with her that I loved, Americans Abroad. But, more importantly, she is a huge comics fan AND from Minnesota. In the years since I graduated from Hampshire, she’s gone on to teach a series of comics lit classes at Hampshire. I’m jealous that I’m not around to take them! Since I can’t do that, it was great to have the opportunity to visit Hampshire in this context, and talk to Michele about her work.

It was a wonderful trip. The whole experience left me excited about comics, and excited about Hampshire. I’ll leave you with this photo of a spiral staircase around a tree, which is out in the Hampshire woods, and which I climbed, despite a missing step! 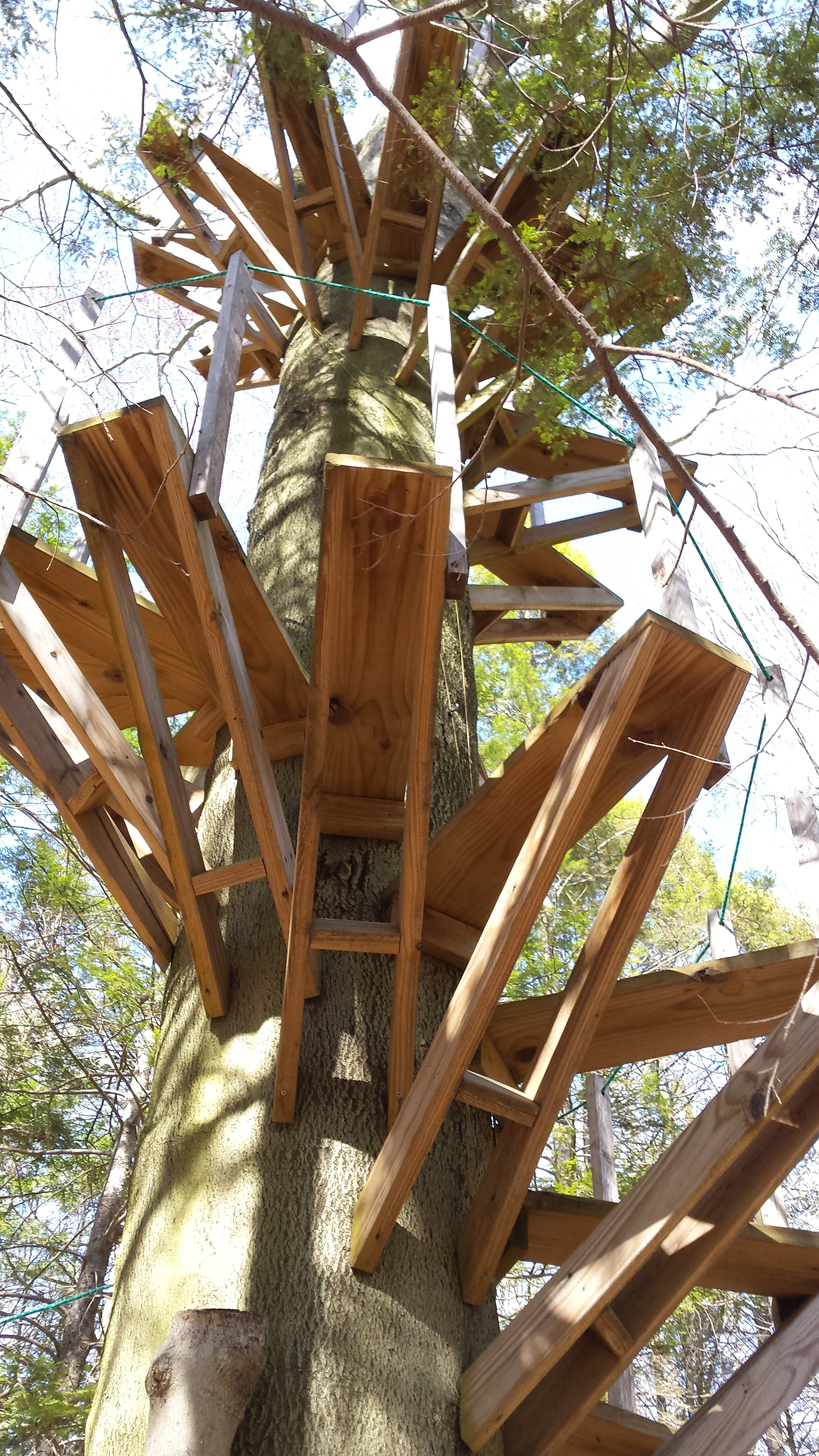 Note: Thanks to Michele Hardesty for taking most of the photos used in this post!