2016 was, in so many ways, a terrible year. I’m not going to recap all of the news items here, because I’m sure you don’t need to see them again. From where I’m sitting, it’s been a regular struggle to avoid regressing into paranoia and the assumption that mankind is inherently evil.

And yet, in the midst of all these terrible headlines, I’ve been fortunate enough to witness and experience a lot of good things in my own life. Sometimes life necessitates a stupid amount of cognitive dissonance. I’m taking this moment to acknowledge the good stuff, and be grateful for it. 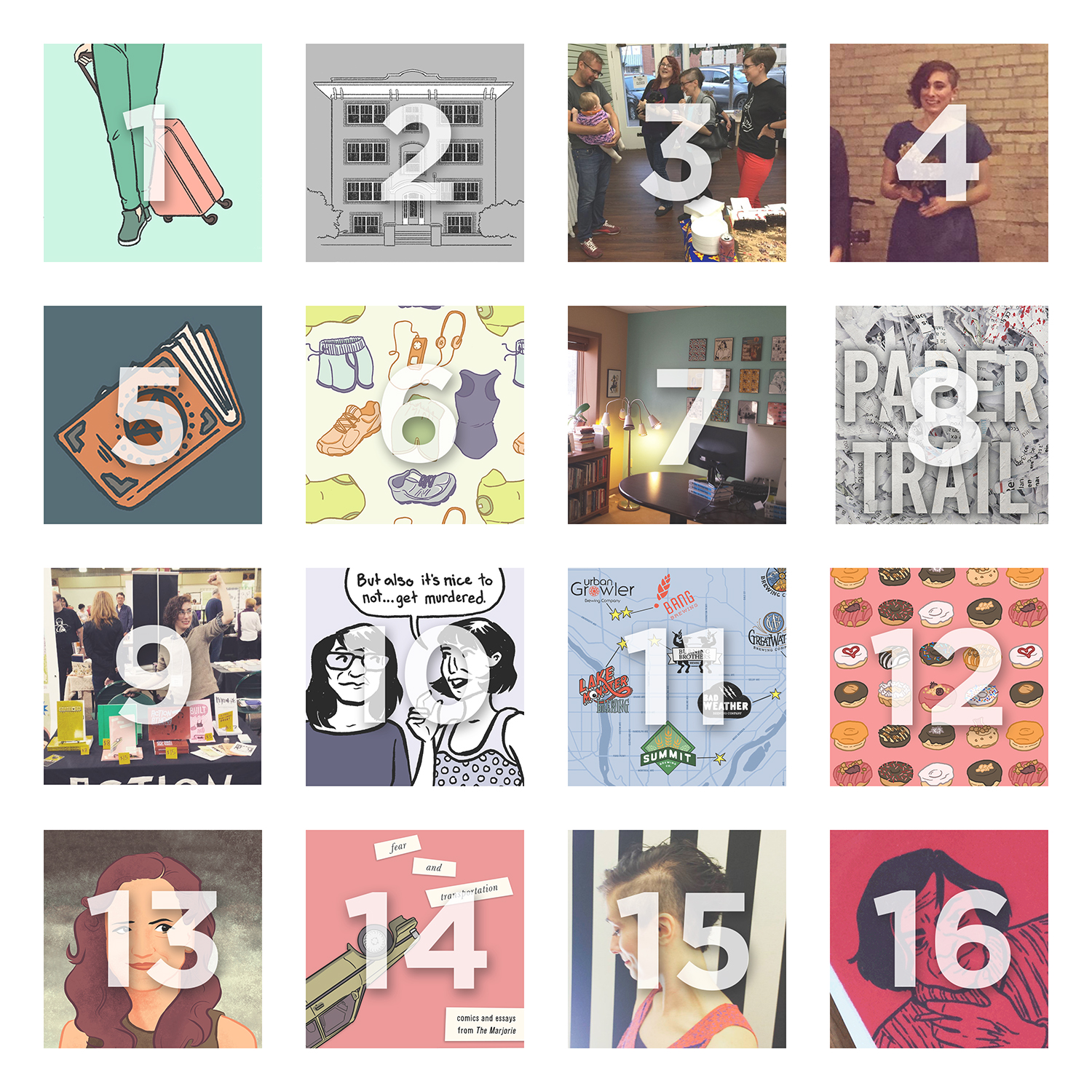 1) Traveled…A Little
In 2015, I was pretty busy. I went on a number of trips, and flew on a number of planes. I also got married! This year was more low-key. I did fly to DC with my friend Britt in September, to attend SPX. But aside from that, my only trips were a long weekend at a cabin in Wisconsin, and an AirBnB overnight with friends in Red Wing. All of it was great! The Wisconsin cabin trip was fun and affordable, and I loved planning it. I am all for more easy, cheap, long weekend trips in 2017. Lake + kayaks + books + beer = a very nice vacation.

2) …But Mostly Stuck Around
In 2016, Jason and I signed our apartment lease for the third year in a row. I’m so glad we did! It’s been wonderful to live in the same place for that long, and not haul all of my earthly possessions across the city/state/country. That said, it looks like 2017 may be the year we buy a house. Yikes! My love for our apartment is great…but so is my desire to own a dog.

3) Socialized
One of the more bittersweet events of 2016 happened at the end of the summer, when the two founding members of Cool Club (our eight-person TV-watching/camping/etc. friend group) moved to Red Wing. We were sad to see them go, but excited to hear about their adventures with their kickass comic shop. In addition to Cool Club gatherings, there were lots of other fun social events in 2016. Jason and Britt and I biked all OVER the Twin Cities this summer, with many brewery stops along the way. My sister, Phoebe, is still my neighbor, and we continue to hang out on the regular. Between those friends, plus a variety of fun coworkers and acquaintances, I feel truly spoiled by the number of cool people I get to hang out with.

4) Celebrated Phoebe’s Wedding
Last year, I went to three weddings, one of which was my own. This year, I went to just one, but it was a very important one. My sister, Phoebe, married David, with whom she shares a beautiful apartment, two gorgeous cats, and the world’s best dog. As I said in my toast, Phoebe and David are so good together that since basically the minute they started dating, it’s just felt like, “duh.” It was a pleasure to help celebrate their marriage. This was my first time being part of someone’s wedding party, and I loved it.

5) Read
In 2014, I read 50 books. In 2015, I read 40 books. In 2016, I split the difference and read 45. The full illustration is forthcoming. Reading remains one of the strongest and most consistent sources of happiness in my life. (I’ve been feeling that especially keenly since, oh, let’s say November.)

6) Exercised
I made a point of increasing my weekly mileage last spring/summer, and it’s felt really good. In the last few months, I’ve done less running and more weightlifting, as I’ve had access to Jason’s office gym. Both running and weightlifting are so much fun! This time last year, I was in a kind of “meh” place about exercise, but I’m digging it quite a bit right now.

7) Got Promoted
It was right around this time last year that I moved from the printing department into the design department at my last publishing company. And it was GREAT. Until the company was sold, and everyone was laid off. But as luck would have it, from there I landed at a new publishing company, as Art Director. The boom/bust/boom of the publishing industry! I am very, very happy to be where I’m at. Sometimes I still want to pinch myself when I think about the fact that I get to go to work every day and DESIGN BOOKS!! Younger Athena would probably pass out with excitement if she knew she’d get to do that one day.

9) Tabled at Conventions
I hadn’t gone to many conventions over the last number of years, but in 2016, I tabled at three. In May, there was SpringCon. In September, Zinefest. And in October, there was Rain Taxi’s Twin Cities Book Festival. It felt nice to bring my work to a show, especially with Fear and Transportation hot off the press.

10) Made some My Favorite Murder comics
2016 was the year I got back into podcasts in a big way. I used to listen to them quite a bit in 2011, before grad school, when I was working at an office job. But this year I dug back in deep, and ohhhhh man, there are a lot of great podcasts out there! I started listening to My Favorite Murder in March, and loved it so much I was inspired to make half a dozen comics about it.

11) Made Maps
Did you guys know how much I love maps? In 2016, I drew three big ones: Saint Paul’s, taprooms, neighborhoods, and West Seventh St.

12) Made Patterns
I just counted, and it looks like in 2016 I created 17 patterns in all. I love making patterns! They are so much fun. I’m not a big fan of wallpaper, but if Jason and I buy a house, I might have to order some custom wallpaper for an accent wall or two. These patterns are begging to be put to use.

13) Wrote Essays
Going by the writing tag, it looks like in 2016, I published 11 essays here. I haven’t written anything of length in awhile. The writing part of my brain has felt dormant for awhile (could be related to events in November, who can say!). Hopefully in 2017, I’ll get back on the writing train.

14) Published Fear and Transportation
The two-year anniversary of The Marjorie is coming up in a couple months. In the time since I launched this site, I’ve published almost 200 posts…and a book. Last May, I released Fear and Transportation, a full-color 62-page collection of my favorite comics, essays, and illustrations. It is very pretty. You should buy it.

15) Got a Haircut
Last April, I shaved the side of my head. I love it.